Get the authentic CrossFit experience! Established in 2006 and located at 47 Clarence St, Coorparoo CrossFit Brisbane is the original and most qualified Affiliate in town.
Ph 0412 346 171 or info@crossfitbrisbane.com 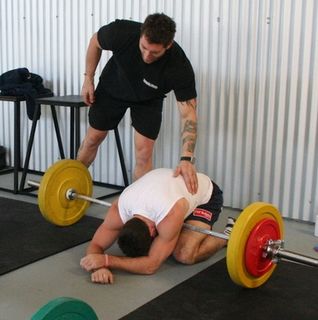 "MSG is added to food for the addictive effect it has on the human body. Even the propaganda website sponsored by the food manufacturers lobby group supporting MSG explains that the reason they add it to food is to make people eat more. A study of the elderly showed that older people eat more of the foods that it is added to.  The Glutamate Association lobbying group says eating more is a benefit to the elderly, but what does it do to the rest of us? 'Betcha can’t eat [just] one,' takes on a whole new meaning where MSG is concerned!  And we wonder why the nation is overweight! MSG manufacturers themselves admit that it addicts people to their products" Read more ...
© 2006-2019 CrossFit Brisbane. All Rights Reserved. 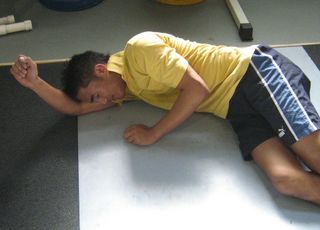 Anyone who trains at CFB regularly will be used to seeing Adrian writhing around on the floor in agony at the end of a WOD.  What was unusual yesterday however, was the technique used and the speed at which he achieved the position.  We believe it was close to a complete back sault from about 6 feet onto the back of his head, in about a second from vertical to horizontal.  Adrian slipped from the bar starting his pullups during the first round of Fran.  Luckily he was ok, although extremely embarrassed to be carted away to the hospital in an ambulance for tests.  After a couple of stitches, a CT scan and a number of confused looks when he told them he fell off a chinup bar onto his head, he was given the all clear.  Thankfully, all that he has to show from the accident is a sore head and a stiff neck.

For all that witnessed the fall and subsequent writhing on the ground, it was no doubt an upsetting experience, especially in the minutes immediately after, when it appeared that Adrian was seriously hurt.  It is nice to know that everyone cares enough to stop dead in their tracks when one of our own is hurt.  Yesterday we saw first hand what we mean by community. Injuries are something that unfortunately happen sometime in all sports, and although we try to avoid them, we are not immune at CrossFit Brisbane.  The best thing we can do is learn from the experience and try to prevent the same thing happenning in the future.

There were a number of things that placed Adrian at risk yesterday.  He started the pullups without chalk on his hands, was gripping the bar with a different part of his hand due to having blisters from a previous workout, it was a muggy sweaty morning, and he was using a very aggressive kipping action which placed him in a horizontal body position in the pulling phase of the pullup.  These things combined with the heat of the moment when trying to knock out a quick Fran time and it is not that suprising that he had a fall.

Grip is important in everything that we do.  An important takeway message is that we need to treat the pullup bar with the same respect that we would treat a heavy deadlift, ie get a good grip before you let it rip!  There is a confucian saying "A good scare is worth a thousand times good advice".  Let's use this as our "good scare" and learn from it.  Use chalk always.  Make sure that your hands are dry.  Stop before you lose your grip.  Avoid exaggerating the kipping movement.  Rest your hands if they are blistered.  Get a solid dependable grip before you start the reps.

On a positive note, I was very proud of the trainers yesterday and the manner it which they professionally dealt with the first aid situation.  There were also some lighter moments.  We were quite concerned when we couldn't stabilise Adrian and get him to lie still.  When I asked him what hurt, he told me his legs.  Confused I asked him whether he fell on them and he replied that they hurt from the Thrusters.  We thought that he was convulsing only to find out that he had so much lactic acid in his legs that he couldn't hold them still.

We are very glad that Adrian was not seriously hurt.  He is travelling for a week now, but will be back on the pullup bars next week, and yes we are going to make him finish his Fran, albiet with chalky hands, a smaller kip and big gymnastics mat beneath him. 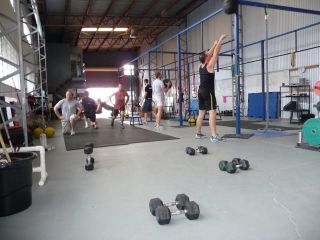 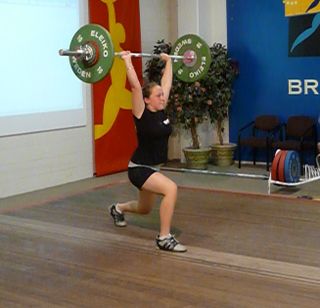 If you have missed a WOD this week, use today to come in and make it up.  Otherwise we will be improving Olympic Lifting skills.  The theme for the day will be getting it overhead ...

Warmup with broomstick drills
Use triples (3 reps) with light weight (less than 70% 1RM)
There is no set rep scheme, play with the movements working form and speed

CrossFit Certification in Brisbane in May!!

Places are limited, so please book early if you are interested in attending.  Bookings can be made by clicking on the above link.  You will be redirected to CrossFit HQ's registration site. 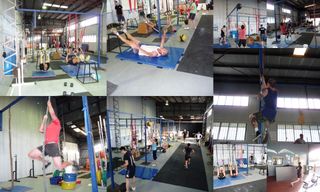 If you cannot do a no feet from sitting rope climb, sub 25 pullups or 25 ring rows 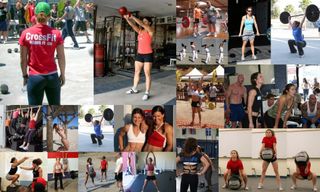 How strong is your "core"?

"There are many functional movement screens out there that will allegedly show the weaknesses of an athlete in training. Our movement screening is based upon the actual, base exercises that we perform (the push press being one). We are opposed to using correlates of evaluation (movement screens) in lieu of using our bread and butter foundational movements. I don't need to "test" your abdominal strength to know that you will fall apart under increased overhead loading. I just need to see you start pressing and push-pressing. Your weaknesses will show themselves. And as Coach Rippetoe says, "The cure for bad form, is good form." - Kelly Starrett

Read this Article from Coach KStar of CrossFit San Francisco

"Awesome facility and staff. Great people to be around"  - Peter W
Member Tools